Do I Cut the Green Wire or the Blue Wire? 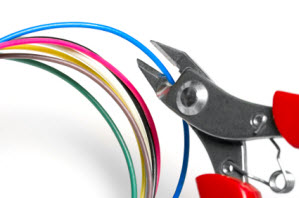 You’ve seen the movies…the hero is facing certain death if he doesn’t figure out which wire to cut to diffuse the bomb and save himself or the girl or whoever. In the end he always cuts the right wire – I think it’s the green one. But the thing is, he’s always taking a risk because he’s not absolutely certain he’s cutting the right wire. And squinting his eyes as he cuts it isn’t going to help or lighten the effects of the impending blast.

Do you ever reach a point like this on your projects? A critical impasse when a decision must be made that can significantly affect the course of the project – it might even mean the difference overall between success and failure? I’ve personally had this happen to me twice – that I know of. Meaning there may have been other decision points like this that at the time I didn’t realize their significance and thankfully I must have made the right decision…but I definitely know of two. On one I made the right decision and on the other I did not. Both projects moved forward and both technical solutions were ultimately implemented and used, but one went over budget by $185k because the choice I made to move forward with the info I had but was not completely comfortable with was the wrong choice.

So, forget the bomb scenario because unless you have a bomb expert on the phone, then all you really can do at that point is guess. Let’s think of it more in terms of this – I have to make this critical decision as fast as possible (today?)…what avenues can I quickly exhaust to try to help me make the best and most informed choice right now? Beyond that, I’ll just have to make my best educated guess. Think of it in terms of “Who Wants to Be a Millionaire.” What are my three lifelines?

I realize these are somewhat obvious, but for me this is where I go – and I usually would do so in this order:

First and foremost take it to your project team. They are entrenched in the project and if you’ve done your project management and team management properly, then they are owning the tasks and the success and/or failure of the project. They care. And they are the most intimately involved in whatever the issue is or whatever the decision affects. Get feedback from them, get decision-making input from these resources. They may have nothing more to offer than moral support, but they need to be first on your priority list.

Next, obviously, involve the customer. I realize there are certain decisions that some project managers and organization leaders might say should not involve the customer. But I’ve followed bad leadership advice on that twice and I won’t make that mistake again. Your leadership is not necessarily seeing both sides of the project like you are and may have things beyond the success of the project in mind when offering advice. Go to them, but not before the customer. Ask the customer for their input, they may have key information that can help you make that critical choice.

To my senior leadership

Finally, go to your senior leadership. Don’t ask them to promise you can keep your job if you make the wrong choice. They aren’t stupid enough to make that promise. Would you? But at least they will be aware and they may have some insight to share that you haven’t thought of. If you’re trying to figure out whether or not to delay next week’s testing because three bugs remain and to delay may mean a nearly project-killing time frame will be missed then it would be helpful to hear that your senior leadership knows of two very experienced tech resources who are immediately available to help you resolve the issues. Problem potentially solved!

There, you’ve exhausted your three lifelines and now you have to make your choice. And this probably happened very fast – that’s the premise of the article – you likely are still making a key decision with far less information than you feel comfortable with. You make the decision as confidently as possible and accept the responsibility for what happens next. It may be a project ender, a job ender, but at least not likely a career ender…hopefully not. But at least you’re making the project call based on your best guess and whatever information you can scrounge up at the last minute. It’s not the end of the world. Proceed with as much confidence as you can muster and cut the wire. I’d personally always try the green one first when in doubt. How about you?