A reader of one of my articles recently commented about people blaming others for failures on projects and workplace tasks. We all know he’s right … some of us may have been guilty of it ourselves once or twice … or had the finger pointed at us in the ugly blame game. But that isn’t very professional and it still won’t resolve the issues with the failed or failing project – something still needs to be done no matter who’s fault it is. Let’s look at the whole blame scenario and how we might react and resolve the situation.

Finding someone to blame the bad stuff on.

The reader states that some PMs have a tendency to blame everyone and everything else when things go wrong. He says that all too often he see PMs blame others (suppliers, team members, customers) or things outside of the project (like the economy or the weather or even the exchange rate). 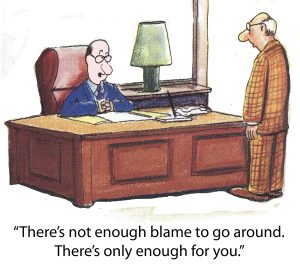 He’s right. There are people in organizations – not just PMs – that do this all the time. And there are PMs – the ones in leadership positions on projects – who are pointing the finger constantly at team members and customers, often just to make sure that they still look good when it hits the fan.

Look in the mirror.

Continuing on, the reader states in his comment that a good PM looks in the mirror first and should be the first to admit the mistake. I agree completely, though admitting mistakes is very hard for some. As the PM, we’re in charge and everyone is looking to us for our leadership. The PM must be in charge and must be ready to take charge and certainly must be ready to take responsibility for things that happen on the project.

I’m not stating that a PM should take blanket responsibility for every bad thing that happens during an engagement. Not at all. Rather an approach of ‘let’s see what we can do to get through this issue together’ is a good course when the problem was obviously caused by something beyond the PM’s control. The PM should not be a martyr taking on all blame no matter who was responsible. Nobody really likes a martyr who takes the weight of everything on their shoulders, but nobody in their right mind is going to follow a PM who finger points when issues arise. No good comes from it and no problems are really solved by it … all it serves is to divide the team and that is a recipe for disaster.

How do you deal with this type of leader?

First, personally, don’t become one. Have you ever found yourself easily pointing the finger at someone else – even privately among your team members? I have, and I hate myself for it later. It can also be detrimental to your leadership position with your team members – if they see you as a finger-pointer in the blame game, then they will not be seeing you as the take-charge leader you need to be.

How should we deal with this type of behavior when project problems or failures arise? Here are my first thoughts…

If the private discussion doesn’t have the needed effect on the team member, then take it to their manager and ask that they be reassigned and replaced on the team. Stop the cancer before it spreads to the rest of the team.

Project managers and project team members … have you seen this in your workplace? I’m sure you have at some point. Was it on your project? How did you deal with it? How would you deal with it? Please share your own experiences and let’s discuss.